Last week in New York, I saw the new show Otherworldly: Optical Delusions and Small Realities at the Museum of Arts and Design, at Columbus Circle near the edge of Central Park, between Broadway and Eighth. Below is the museum's description of the show:

"Otherworldly: Optical Delusions and Small Realities illuminates the phenomenal renaissance of interest among artists worldwide in constructing small-scale hand built depictions of artificial environments and alternative realities, either as sculpture or as subjects for photography and video. These are worlds of "magic realism" conceived and realized through intense engagement with materials, attention to detail, and concern for meaningful content. In this exhibition, the works are presented as dioramas, models, snow globes, and site specific installations, as well as through photographs and video."

In other words, really cool work on so many levels, in terms of concept, craft and combination of high and low tech execution, and by so many different artists. I was surprised at how many artists I was already familiar with, in particular Lori Nix (see previous WonderHowTo interview with the artist here).

Nix does not usually show (or save) her diorama models and to see two of them side-by-side with her large format photographs was pretty cool. Below are screen captures of the two-minute video interview with Nix. 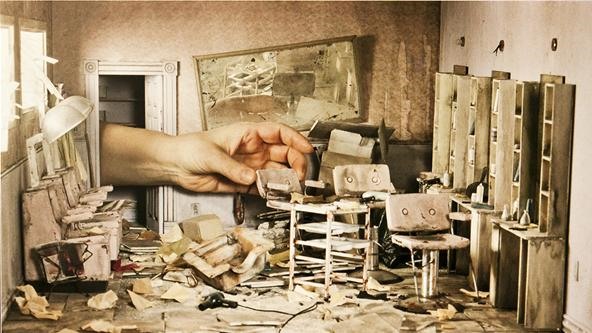 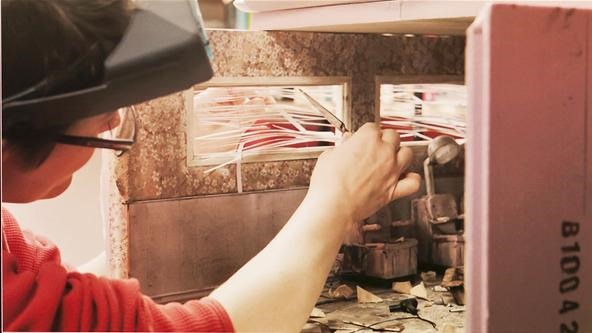 I took pictures at the show, of course not good ones, including the image of Nix's Violin Repair Shop model. I took the pictures to give a sense of the range of artists and the work. Be sure to visit the website and see better pictures and more artists. 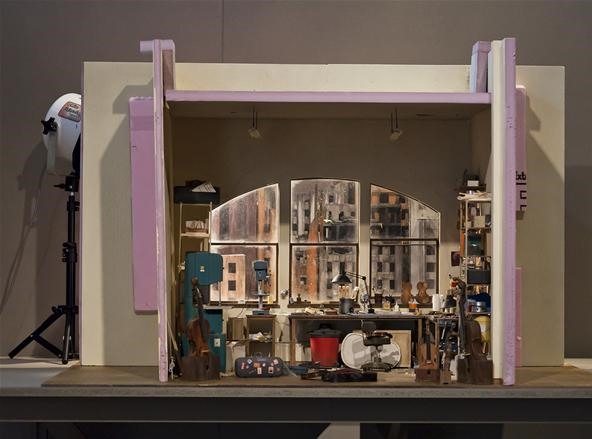 I loved seeing James Casebere's work again (one of the pieces was in the last Whitney Biennial) and seeing one of Kim Keever's pieces (after seeing a gallery show last spring here in Chicago at Carrie Secrist) along with a video of him with a model. For some reason, Matthew Albanese does not appear on the list of artists on the website but his model and two different large-scale photographs are in the show. It was great seeing not only his model, but also the two very different images that he created from the same model. 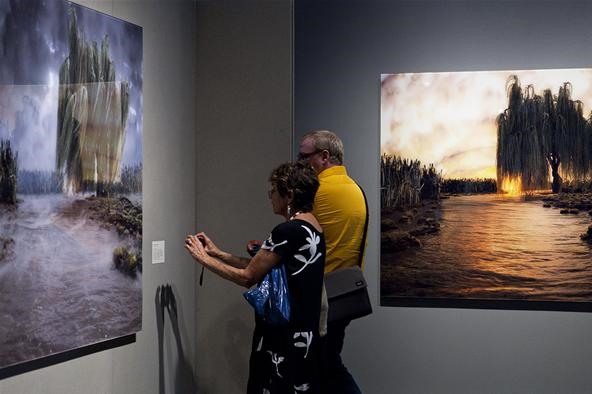 I have seen Didier Massard's The Monkey  on flavorpill, of all places, but seeing the model was really interesting. (Be sure to click through the flavorpill link. My picture from the show had too many reflections from the window opposite the work.) 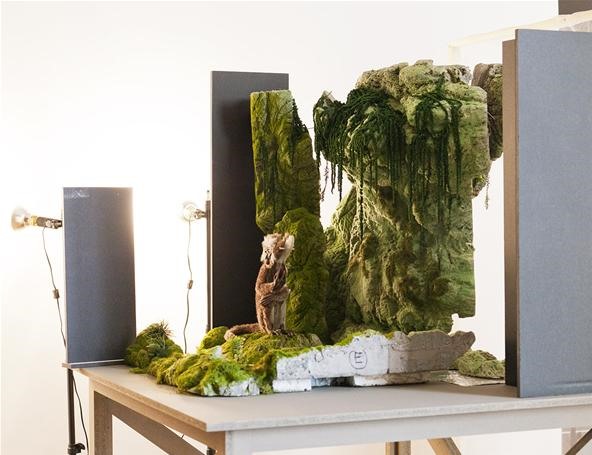 Some artists I was not familiar with but completely captivated by include Patrick Jacobs, who created tiny dioramas behind a backlight convex piece of glass set into the wall. Seeing them made me lean in, literally, thinking that the view would go on forever. 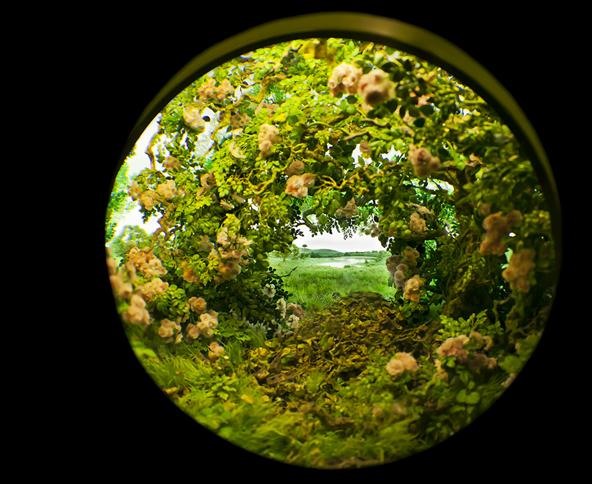 I also fell in love with Bethany de Forest's work. The combination of model, photograph and pinhole video encompassed a breadth of imagination and creativity that was utterly captivating. Again, below is a bad picture of awesome work, so please click through to her site and/or to the exhibit site. 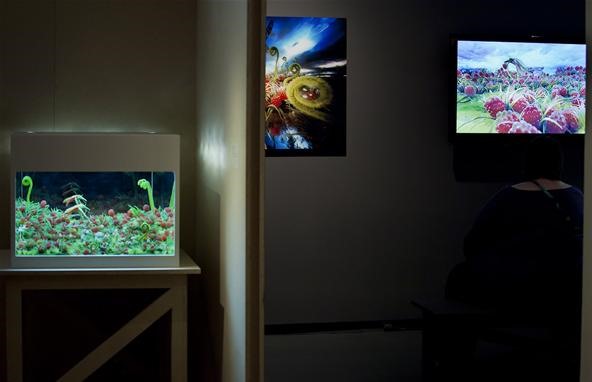 The expansive show is on two floors—I know I didn't see everything. There are so many interesting works that I haven't mentioned. One amazing piece, sadly, seemed to be broken (Jitsuro Mase and Tom Nagae's 13DG_Palm Top Theatre) and another piece absolutely must be seen to be appreciated. Mat Collishaw's Garden of Unearthly Delights, a large Zoetrope of frenetic intensity.

Otherworldly: Optical Delusions and Small Realities ends September 18, 2011. Another reason to visit: the museum itself is a thing to see. The building is striking and the restaurant on the ninth floor has beautiful views of both the park and the busy streets around it. I hope to go back before the show closes and have lunch at the restaurant after seeing the show again (the museum is open Thursday nights until 9:00 pm and according the restaurant hostess, the contrast at night between the emptiness of  the darkened Central Park and all the lights of Broadway is beautiful). If you can't get to New York to see the show, there's always the catalog. Mine is in the mail already. 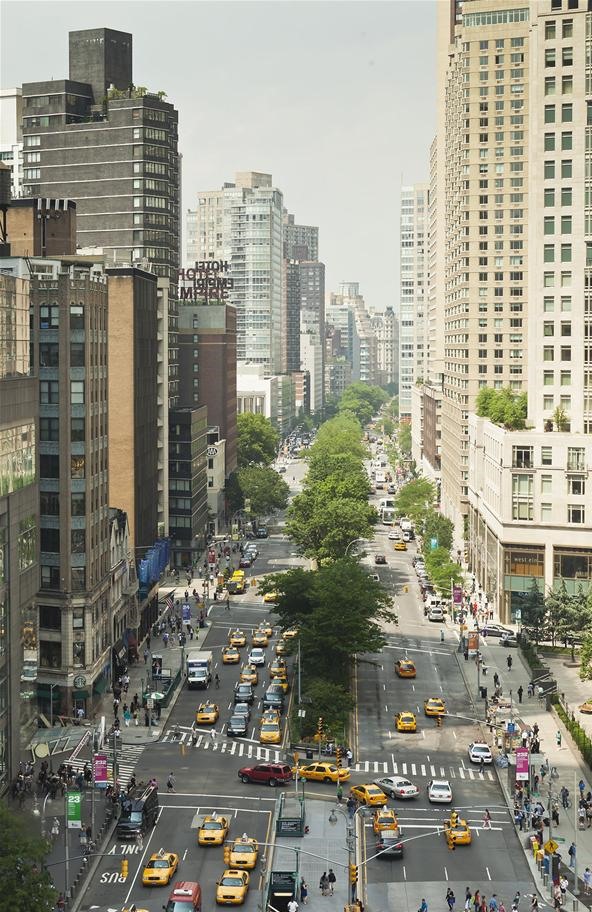 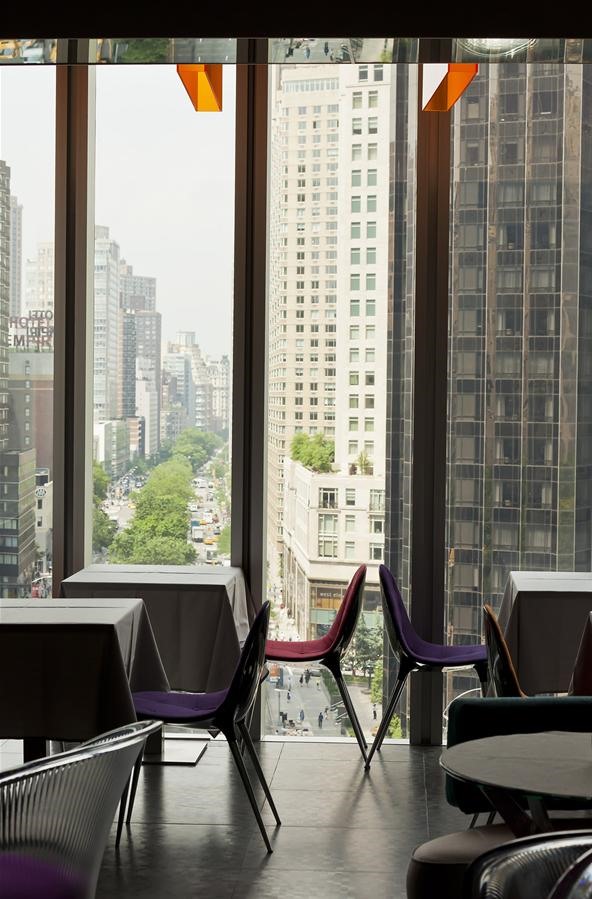 I love the zoetrope piece, came across it last week on Animal NY. the shot with Lori's hand intruding on the diorama is awesome!

I heard an interview with the artist but didn't have any idea how amazing the Zoetrope piece would be. Yikes! And the the shot with Lori's hand is THE P.R. piece for the show!

I love Garden of Unearthly Delights!

this is an amazing talent that i wish i could replicate